What's available on World of Nephilim?

Everyone on World of Nephilim has one interest in common: Shadowhunters. Whether it's the tv show, the movie or the books we all love Cassandra Clare's works. You will immediately get to know other new fellow Shadowhunter fans and will most certainly form lots of unique friendships. Who knows, maybe you'll even find your new best friend at the Soul Ceremony.

Enjoy yourself in the chat and write about whatever you desire. What did your Nephilim friends do today and did you hear the latest gossip?

Let your character unfold in the Dining Hall or perhaps have a date at the Hunter's Moon in New York? Everything is possible in topics and is (almost) only limited by your imagination.

Get the most angelic achievements and show them off to your friends. Gain experience and level up and discover new functions on World of Nephilim. The higher your level is, the better a Shadowhunter you are.

Shop in Idris or New York! Are you thirsty? Get yourself some Chamomile Tea at Blackthorn's Bed and Breakfast. Or how about showing off your sense of fashion with new clothes from Magnus Bane's Clothes?

Learn Latin and study Runes, or submit a beautiful painting you've created at The Arts class. You can enroll in more than 10 different classes.

If you have any questions or request, please contact us at this email: wox@eye4web.dk 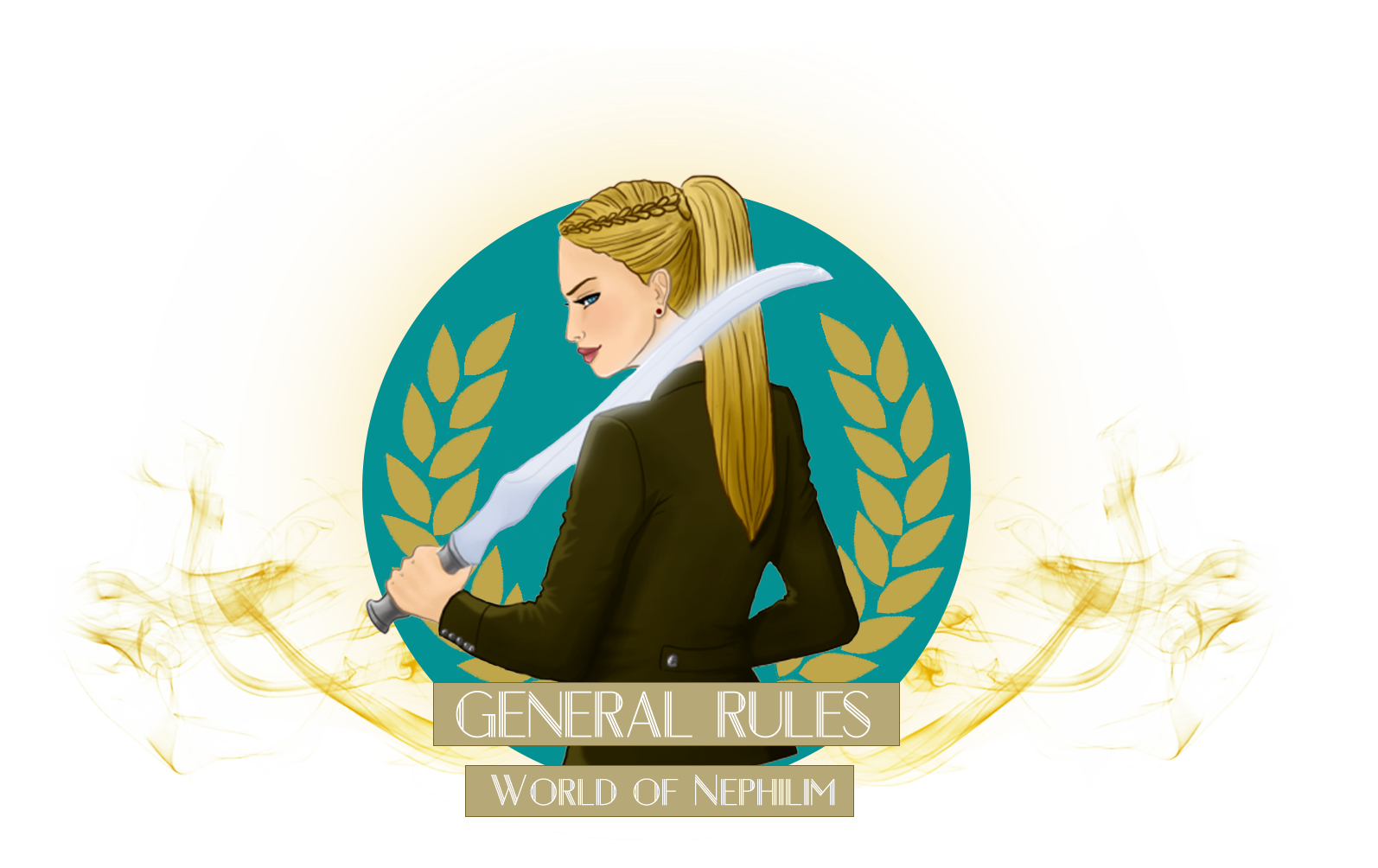 World of Nephilim is an independent The Shadowhunter Chronicles fansite. User content on this website and illustrations are credited to the individuals. This webpage and the World of Nephilim website are not endorsed by, (directly) affiliated with, maintained, authorized, or sponsored by the original owners. All names used are the registered trademarks of their original owners. The use of any trade name or trademark is for identification and reference purposes only and does not imply any association with the trademark holder of their product brand.

You have to be at least 13 years old to be a part of the site. If you are under the age of 13 you will be banned until you reach the right age.

You always need to keep a respectful tone on World of Nephilim - both in the topics, as well as in mails, the chat, and posts. Bullying in topics is, therefore, also not allowed, unless arranged by all involved parts with everyone keeping a realistic attitude towards the situation.

For instance, a bartender, Demon and more. These need to be viewed from the point of your own character. You can only roleplay as another person, when the Plot-team specifically offers you a role in an ongoing plot, in which case you need to disclose this in an OOG message when you enter the topic. NPCs and other roles can't be other users of the website, the books, movie or series.

Alcohol is allowed as a subject, however, don't go overboard with this. Topics such as drugs, self-harm or other sensitive topics are not allowed. Meaning triggering topics such as mental illnesses, self-harm, sexual assault [...] are not allowed to be incorporated in your backstory or anywhere else on the site. However, if there is an aspect that is / might be considered as triggering by some, you have to make sure to add a warning  message there. If you're unsure about whether or not your content might be allowed, you should always check with members of the Backstory Team.

Any encouragement towards illegal activities is prohibited pursuant to European laws.

The Consul, Inquisitors and the Leader of Illustrations own all rights concerning the illustrations. If you are not an appointed illustrator for World of Nephilim you are not allowed to distribute copies of the work specially made for WoN to the public. May this be for sale, rental or lending, and/or to display the image without the permission of Vienna Carrington. Some of the items were inspired by designs found on the internet, but the illustration is always unique and drawn by us.

It is against the rules to copy or use any codes you may find on World of Nephilim. All codes from user’s profiles have been created by or for that user, these cannot be copied and/or used without the user’s permission. All other codes found on the site (for instance: frontbox, clubs, the archives, lessons, profile texts, and backstory codings) that belong to the authors, admins, and creators of World of Nephilim are also not to be used without permission of the rightful owner. Further action will be taken by the World of X Admin team if codes from the site are used without consent.

Furthermore, it is appreciated that ideas created on this site are not taken without asking for permission. It takes only a small amount of time to ask, but shows a great act of politeness.

Rules are subject to change at any given moment in time.
For any questions or suggestions please contact Vienna Carrington.